All articles tagged with "Brutal"

Teodora and Stacey kick their instructor

Teodora and her friend Stacey were in the gym learning to kick box and do karate. They are quick learners and after a few lessons, they started beating up their instructor

If you want to mess with a girl, do not mess with Jennifer. She is made of steel and knows how to choke hold, leg scissor and head lock an opponent, whether male or female. She beat up this guy until he begged for mercy 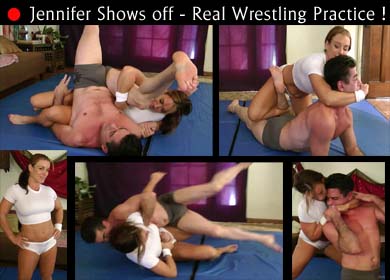 Emily is a karate queen. But she does not let people know it. They only find out after they have tried messing with her. Then she kicks them brutally, beats them and leaves them red faced and in lots of pain

The painful wrestling move called the Knee Backarch Chinpull is what this girl uses to put her poor slave in a position of great pain. She locks her feet in behind his knees with her knees in his back and pulls back with her full weight, brutally choking him. She pulls until it looks like he is about to break and it is this sort of domination that this blonde thrives on. 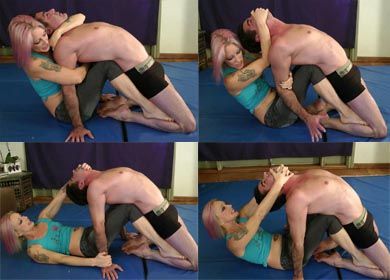 Jannine and Olga were chatting when they started debating who between them is a better wrestler and who was stronger. They decided to test each other's strength through tugging a rope and through arm wrestling. When all those could not settle the question of who was stronger, they decided to wrestle. They were kicking, using mixed martial arts and head locks on each other. They were red faced, but their resolve was clear. Each wanted to win.

Miss Melanie was clearly pissed. And when she is, woe unto anyone who is near here. This loser happened to be, and he felt her wrath. She took him to her garden and ordered him to remove her shirt. She kicked him with her boots in the nuts and the cock before kicking his upper body karate style. She trampled on him and even sat on a chair and started to kick his face while he tried to endure the excruciating pain he was feeling.

Jannine and Nadine love female wrestling, and they are competitive. So they decided to wrestle each other and find out who will emerge the winner. Their wrestling started slowly but ended up with both girls choking each other, giving each other head locks, choke holds and sleeper locks. Although one was heavier and stockier than the other, it was hard to tell who was defeated as they both gave a good account of themselves.

Mistress Leila and Mistress Kasr are two sexy babes that are working with macho guy Kemal on their martial art skills. These sexy babes are learning how to be a better fighters but they are the ones that end up teaching their teacher a lesson. These sexy mistresses work together to give him a brutal ball busting session that he will not forget for a long long time as they kick him over and over again. 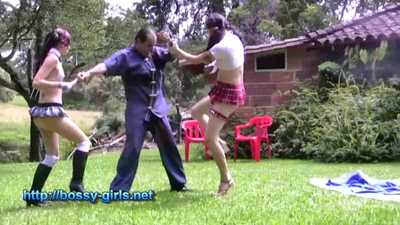 Aries is a brutal brunette babe who likes her lowly slaves to be weaker and shorter then her. She orders her slave to stand up with his hands bound behind him, so she can use him as a human punching bag. Once she is done bludgeoning him with her fists, it is now time for him to get a huge whiff of her sweaty socks. This ruthless mistress takes her socks off so he can really get a