All articles tagged with "Humiliation"

Madame Marissa and her friend had a new slave and they wanted him to learn why he should never mess with them. The mistresses made him kneel down on all fours and whipped him as well as slapped him as hard as they could manage. It was not only cruel but brutal as well. And the mistresses, being pain and punishment aficionados, made sure they gave him a punishment he would not forgiet.

Mistress Bibi loves to fight. She is always looking for an excuse to fight and she never lacks one. Today she was fighting with this girl over claims that she was spreading rumors about her. She used the chance to rough her up although she was not an easy opponent. It took her a lot of time to defeat her. They rolled down and held each other in head locks and leg scissors before she won it. 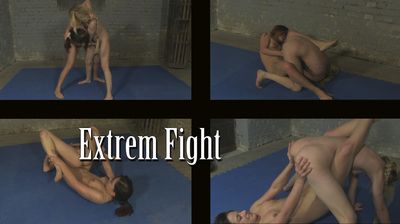 This guy always had a hard on and this mistress wanted to teach him some good manners. She tied him up and she made sure he was defenseless. She had a free ride to crush him in the balls. She kicked him as hard as she could and made him know she had more where that came from. She told him if he did not change and improve, he would only have himself to blame.

This guy thought he was tough and could do anything he wanted but mistresses Teodora, Sonny, Britney, Bean and Daria showed him otherwise. They ganged up on him and trampled him and kicked him brutally. They beat him up and enjoyed as he begged for mercy despite the fact that he was bragging just a few minutes earlier. They humbled him and made him promise never to brag any more.

Lady Krasaviza loves boxing and likes to practice on slaves. She waits till her slave has messed up then she wears her boxing gloves and she punches her slave who is usually tied with his hands to his back and is defenseless. She likes to use her slaves as her punching bags but this slave was not like the others as he endured everything she threw at her and did not beg to be let go.

Mistress Amber had a score to settle with this girl and she did it cruelly. She wanted to make sure that the girl learned her lesson and learned it well and the hard way. She tied her up and had an easy time humiliating her. She whipped him, pinched him and even grabbed her nipples. She did all she could to make the girl feel lots of pain and it worked.

Madame Marissa is a very private person. When she realized that her slave had leaked her secrets to someone, she was pissed off and had to make sure he learned his lesson. She beat him up by kicking him and using her feet to crush his neck and choke him. She had not used her martial arts skills to beat up someone in a while so it was refreshing and a lot of fun for her.

Lady Betty and her friend Bertie met this guy who bragged that he was a strong guy and the mistresses could not make him feel pain if they kicked him or punched him in the stomach. He wanted to impress them then sleep with them but he did not know that they were trained in mixed martial arts. They tied him up against the wall and kicked him as hard and as painful as they could and used their martial arts training to make him cry in pain and make him beg them to stop.

Mistresses gang up on guy and torture him

Mistresses Teodora, Maya and Sonny are bullies. They are hot mistresses and love having fun. But unknown to many, they like to use their looks to bully. They promised this guy fun and took him back to their house but instead of fun they gave him a lot of pain. They trampled him, crushed him and kicked him. They tried mixed wrestling techniques on him and had fun while he was experiencing a lot of pain.

Lady Betty tramples guy and spits on him

Lady Betty is a cruel mistress and enjoys being cruel. She likes looking for trouble and when a guy messes with her, she takes advantage and beats him up. Today she was trampling this guy and kicking him. She even spat on his face and slapped him using her feet. The guy did not even try to fight back or shield himself from her blows for fear of upsetting her and making it worse.